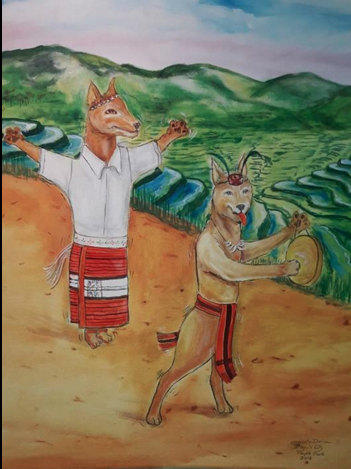 If I fancy myself being immortalized in a painting, I’d be elated to be depicted as a poodle in a tutu. Not saying this because of my obvious devotion to dogs but because I’m aghast at the reactions of people who are socially crucifying a painter who had portrayed two anthropomorphized dogs donning  Igorot native attires and dancing to the beat of the symbolic gangsa.

People were quick to hurl furious comments not just at the piece but the artist behind the work. I find it quite appalling that such scorn can be easily given without giving second thoughts to the probable reason or reasons behind the creation of the piece. Following the train of thought that it is demoralizing to be likened to dogs because of their nature to be rabid and ferocious (also an outright misconception), it is the humans who are now behaving as such with their overzealous, cringe-worthy comments and reactions. The irony.

I too am an Igorot,  proud and true, but in no way did I feel debased and insulted when I saw this artwork being scornfully construed online. In fact, to be rendered as one of these four-legged animal should be very humbling because we don’t even come close to the poignant admirable characteristics a dog innately has.  Attributes that humanity evidently needs.

On a daily basis, we see hundreds of animals given manlike facets since the advent of media and the internet  and no one bats an eye. Then an artist puts some ethnic clothes on two dogs and all hell breaks loose. Reason presumably being it is culturally insensitive and demeaning. I won’t even try to justify these vehement reactions just to be impartial to the onion-skinned.

I am in no way knowledgeable about art and do not pretend to have an inkling about artistic expressions and interpretations, but it does not take a pundit to glean from a subject if it is meant to degrade or not. Just like a lot of people are passionately conveying their indignation towards the painting and the man behind it, this piece was simply an expression without the least bit intention of causing malice to anyone. Imaginably, it is an optimistic foresight for the Year of the Dog taken into context when it was done. Or better yet, have the artist himself relay the thoughts behind its conception. Moreover, the painter himself is an Igorot. To say this is a slur on our ethnicity seems far-fetched. How can this be a case of ethnic prejudice?

Each to his or her own opinion and by all means, express. But sometimes, maybe all we need is a chill pill. Or a dozen in this case.

***For a very enlightening reading, I beseech you to please read: